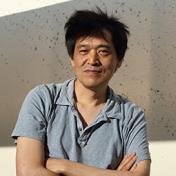 Takashi Ikegami is a professor in the Department of General Systems Sciences at the University of Tokyo. His works encompasses both the arts and sciences and deal with complex systems and artificial life. He received his doctorate in physics from the University of Tokyo in 1989. Currently, he is a professor at the Department of General System Studies, at the University of Tokyo. His research is centered on complex systems and artificial life, a field which aims to build a possible form of life using computer simulations, chemical experiments and robots. Some of these results have been published in ”Life Emerges in Motion” from Seido Book Publishers in 2007 and “In Between Man and Machine” (Kodansha, 2016). He has been doing media arts since 2005. Filmachine (with Keeichiro Shibuya, YCAM, 2006), Mind Time Machine (YCAM, 2010), Long Good bye (With Kenshu Shintsubo, Japan Alps Festa, 2017), Offloaded Agency (Barbican, 2019).